This is a diary so to speak. Documenting the outdoor activities I enjoy. Currently I'm trying to master windsurfing so that subject will be covered extensively. If you read this don't expect award winning writing as it was never really a strong point for me. You may however find a cool photo or two.

Most photos can be enlarged by clicking and feel free to leave a comment.

What better way to spend an August Sunday afternoon. SE wind Upper teens to low 20s and a bunch of friends. Dave Kashy running helmet cam chasing everyone down.
Thanks again for the video Javier.

Some footage shot from a flat water session in Rodanthe a couple weeks ago. I like Javiers videos because I usually get a brief cameo. We sailed from 11:00 till 4:00 when the wind ramped up a bit but too tired (and hungry) to rerig.

Here is a video of a friend doing doing some wave sailing on his home turf in England.

The content lul on this blog will come to an end soon.
Posted by Outdrsmn at 8:45 AM 1 comment:

Email ThisBlogThis!Share to TwitterShare to FacebookShare to Pinterest
Labels: windsurfing

Sunday I tried out a few new things... First was a Formula board in conditions that were conducive to sailing it. Second, my new GoPro digital camera.

The formula board was awesome in the conditions, a nice steady 10 to 12 knot SW wind (at least for most of the session). Air temp was in the 70's and the water was in the low 50's warm enough that gloves and cap and booties were not necessary. Unfortunately I sailed alone so I couldn't compare what I was doing to the other sailors. I will say the ability to point up and down wind was instantly noticeable. The ease at which it planed up was also immediately noticeable.

I can sail in 10 to 12 knots on my freeride board with the same 7.8 sail I was using but it is only good for BAFing, planning is marginal and I generally wish I had a bigger sail. On this a couple pumps and I was off and running. Transitions were mostly dry thanks to the width.
All in all I enjoyed my first formula experience. Now I'll need to try it with a real race sail.

As for the GoPro I'm impressed! I don't have any elaborate mounts for it yet so I basically tied it to the tail of the boom on one side and filmed from that location only. The video quality is nice for it not being the HD version.

Attached is a quickly edited (No music) clip of the session including a nice little wipeout at the end.

John Contos and I went out last Sunday to get in our February sail for the 12 month club. The weather was bright sunshine with a balmy 40 degree air temp and a refreshing 35 degree water temp. West wind was blowing 15 to 20. Yes it was cold but it happened to be the warmest day we had for the first two weeks of February. Being that we already had two snow events and a possible third coming down the pike it seemed prudent to get out and get it done. Who knew what the rest of the month would be like, a deep freeze, a Blizzard or it may even hit 70 degrees. With the trend being on the unusually cold/snowy side it seemed like a good choice.

The session started off nice, floaty boards, 7 meter sails, enough power to plane better than half the time. Made a couple dry jibes and even when I didn't the waist to chest deep water kept my head dry. Not that it would have gotten wet with all the protection I had on. I sailed for about an hour and went in to take a break. I needed some water and to cool off a bit. Yes, I was sweating in my suit. Figured I'd take a few photos of John too.

On the way back out the water had gotten quite shallow so I touched bottom with my fin in a few spots. Once I was in the deeper water I caught a gust and started to accelerate. Just as I was making my way into the straps my board bucked and pitched me. John had just passed me going the opposite direction so he heard the hit and subsequent splash. I knew I hit something big and unforgiving. Now I've hit gill nets, a crab pot float I was trying to jump and run aground but this felt like none of the above. I wandered back 20 feet to the murky sediment filled spot in the otherwise clear water to figure out what it was and assess weather or not the object could be moved or if it should be marked to keep the next guy from hitting it. I was expecting a piling, a boat motor, a boulder, a whale skull... Turns out it was a crab pot, not just your average run of the mill crab pot but something that looks like it was built as a maximum security prison for crabs. Were talking a steel cage made of 5/16 inch steel round bar. At that moment I started thinking about my poor fin. I flipped my board over and low and behold it was still there, cocked in the box with a nasty scar down the leading edge near the tip. Even after cleaning off some of the muck and oyster shells it still weighed a ton. We set the trap on Johns foot straps and walked it back to shore. There was no way we were going to leave it there for someone else to hit.

It took a few strategic whacks with a mallet to free the fin and to reveal a decent crack in the back of the fin box needless to say my day was done. Fortunately there was no water intrusion so the board should be able to be fixed up good as new in a few weeks.

I still rode home with a smile on my face. It was a good day of sailing prior to the introduction. I got to blast around on my big board for a while, maintain my 12 month status and I sailed in the coldest conditions yet. The 75 degree combined air and water was 15 degrees lower than my previous threshold. Now I really don't have an excuse for not sailing all winter. 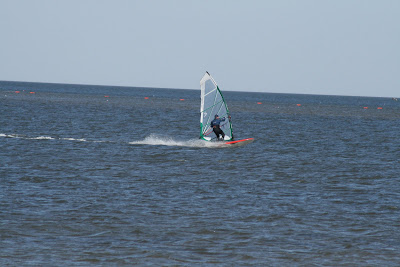 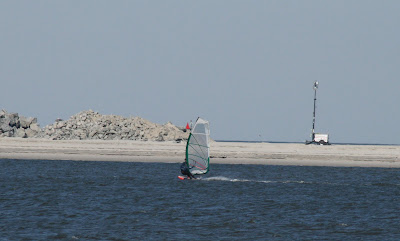 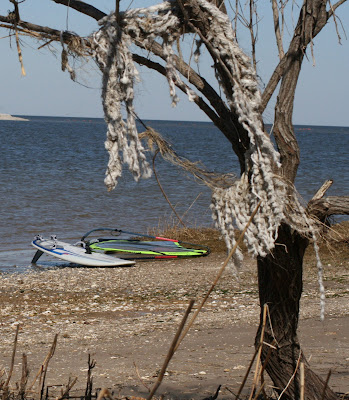 Stout enough to contain the Kraken 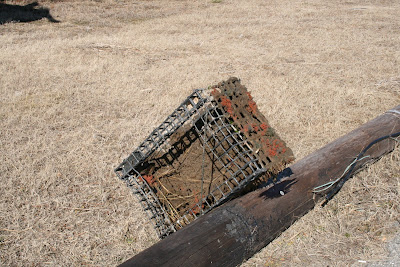 Ouch! Believe it or not!! It did dent the cage. 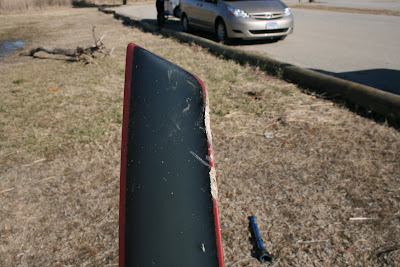 It's been forever since I've had wind in my sails, at least that is how it felt. December 9th was the last time I was out on the water. Between the Holidays, snow, cold and sickness I have managed to miss every single windy until yesterday.

It was a nice day the temps started out in the mid 40's and was supposed to get up near 60. The pre-frontal winds were due to start kicking in from the SSE and top out around 20 mph. Good for a 100l 5.8 day. Becky and I headed down to sail in Aydlett as the wind was to be stronger and the water about 5 degrees warmer than in the bay. When we got there the clouds started breaking up and the sun was causing the temps to rise further than anticipated, ultimately starting the wind decoupling from the water. That is one of the drawbacks to sailing winter southerly winds around here if you get a 15 to 20 degree difference in the air/water temps The cold water can create a bubble over it causing the winds to lift off the surface. Steve and Billy were out planing on 7.5 and 115ish litre boards when we arrived but within 25 minutes they were schlogging.

I rigged a 6.7 and 140l made a couple runs out and back planning occasionally. Becky used 5.8 and 145l, only made one run due to inadequate booties but she caught a nice gust and motored on out. Billy went back out on a big board schlogged most of the way and came back to try his 9.0. I was way too much for the outside so he put the 7.5 back on. Vito sailed 7.5 and a large board He planed a few runs but the wind had finally completely decoupled only giving us teases of what it could be.

My January sail is in the books maintaining my 12 month club status. Hopefully with all the cold weather coming early this winter, we will get a nice warming trend in February. I hope I don't ever have to go 46 days without sailing again.
No photos this time.....
Posted by Outdrsmn at 6:30 PM No comments:

Merry Christmas to all.


Right on time... Here is the video of the annual W.E.T. Santa sail. 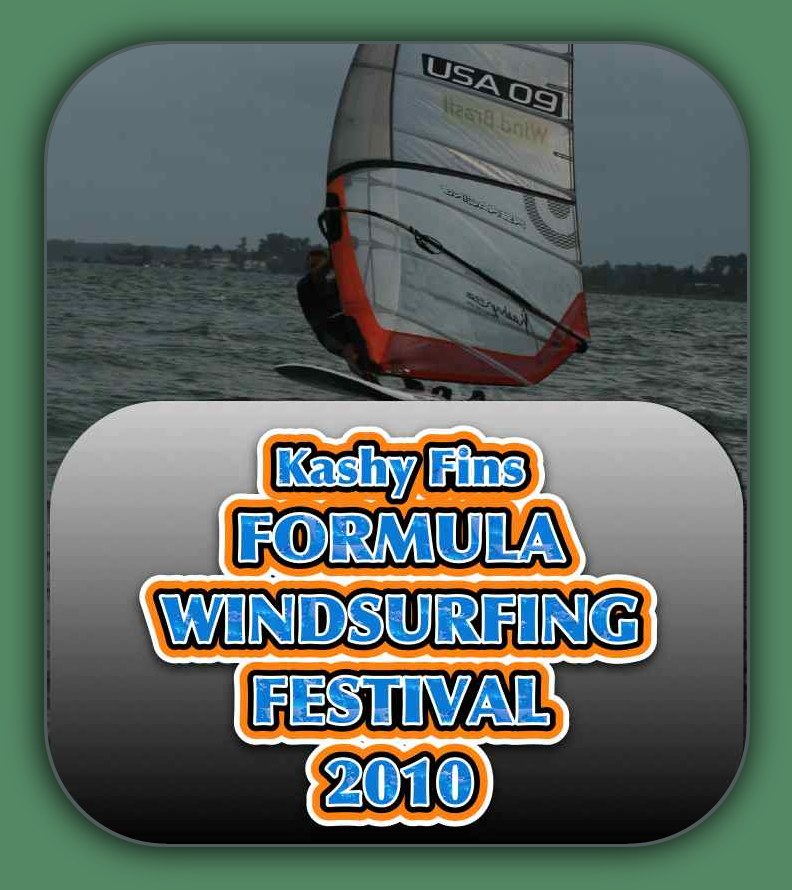 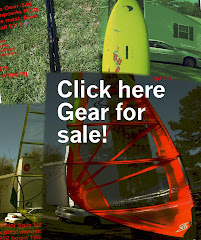